AT THE MOVIES: 21 Bridges has the grit and pace of an excellent cop drama 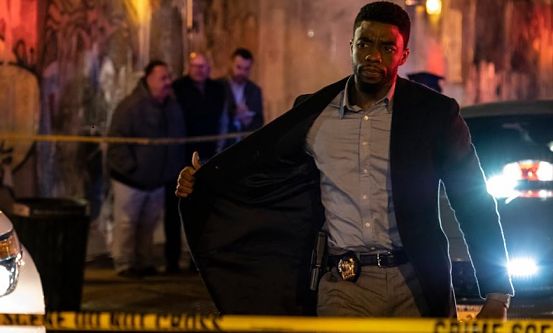 THE ENFORCER: Boseman plays a no-nonsense lawman in his latest film.

POLICE officers on the silver screen fall into one of two categories: first-class crooks or first-class champions of the law. In the must-see new drama 21 Bridges, you get a fascinating combination of the two.

Engrossing, stirringly told and strongly acted, the film (directed by Brian Kirk) explores power, justice, corruption, the scourge of crime and other weighty themes, while delving into one officer’s quest to clean up the messy New York streets.

Chadwick Boseman, in arguably his finest role since taking on the titular character in Black Panther, stars as Detective Andre Davis, a second-generation NYPD lawman who takes his work seriously. Following in his father’s footsteps two decades after his death, he’s excellent at his job.

He encounters one of his toughest cases yet when two strong-willed young men (Stephan James and Taylor Kitsch) find themselves on the run after a cocaine robbery goes horribly wrong and a total of seven cops are shot dead.

Branded as cop-killers, Michael (James) and Ray (Kitsch) are determined to get away, but with Davis and his female case partner (Sienna Miller) on their trail, their escape plan hits a massive brick wall. What’s more, Manhattan is put on lockdown to trap them. The night-long manhunt intensifies, the body count piles up, and the film (expertly paced) races along to a shattering conclusion.

Above all, 21 Bridges demonstrates that while working cases, cops need a certain fearlessness. It’s beyond essential, and you dare not give away your trust foolishly. Boseman’s Davis could be the poster boy for honourable young officers everywhere who get sobering reminders of this every day, as they strive to do the right thing.

But like his superior officer (played by J.K. Simmons), Davis is not one to back down from a challenge or get disheartened by disappointment. “In the line of duty,” he asserts, “sometimes you have to look the Devil in the eye.” Tyrone’s Verdict: A-

Email ThisBlogThis!Share to TwitterShare to FacebookShare to Pinterest
Labels: At The Movies, Chadwick Boseman, Current Cinema, Film Review, Flick of the Week