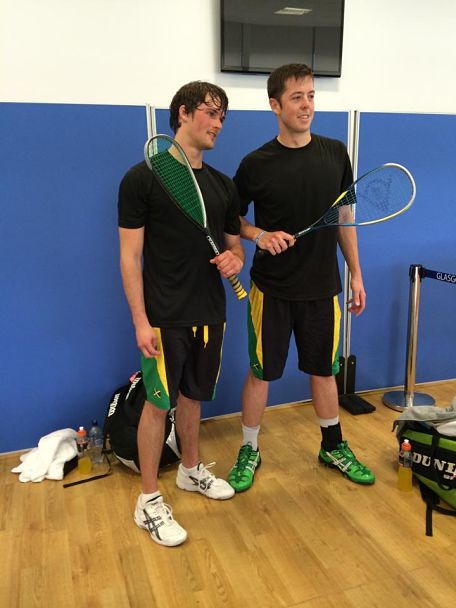 GAME TIME: Burrowes and Binnie play nice ahead of taking the court.

LAST Friday night at the Liguanea Club, as two of Jamaica’s titans of squash reignited their long-standing rivalry, Bruce Burrowes had overwhelming crowd support behind him, but Chris Binnie had a greater reserve of stamina and endurance on his side.

In the end, Binnie prevailed after three sets (11-6; 11-4; 11-3) to cop the All Jamaica Open Men’s A title for the ninth time. Local squash fans will agree that when Binnie and Burrowes go head-to-head on the court, you’re in for an entertaining, high-adrenaline affair. As Binnie tells us, their “friendly” rivalry started from they were kids.

“We grew up playing together, so we’ve been at it for year. Every time we play against each other, it’s intense but it’s like old times,” says Binnie, who turned 30 this year. “We continue to push each other. He definitely pushes me to play better and better, and it’s good for the sport.”

Burrowes has nothing but superlative praise for his fierce and worthy opponent. “Chris really is a top-class player. He’s certainly earned his keep at the top of the ranks. He’s done Jamaican squash proud and I’m honoured to call him a teammate and friend.”

The fearless duo, along with two other local standouts (Lewis Walters and Tahjia Lumley) represented Jamaica at the recent World Squash Championships, which kicked off in Washington DC on December 15.

Jamaica Squash Association president Chris Hind is confident the guys will do well. “Only 24 teams were invited, and Jamaica is among those 24 teams, and that says a great deal about the quality of squash we’re playing,” Hind tells TALLAWAH.

As for the boys’ rivalry, he sums it up as two great athletes playing some of the best squash of their lives. “Bruce is an excellent player. It’s just unfortunate that Binnie always comes out on top whenever they meet in the final,” the president adds, chuckling. “Binnie is a professional, a solid competitor, and I hope he gets into the top 50 in the world.”

>>How much longer can Chris Binnie go?
Known for his intense, Navy Seal-type training sessions, Binnie is fitness personified. But, by his own admission, the body has its limits. “If you want to be great at your job, you have to be practising day in and day out. But as an athlete, by the time you get to 35, 36, 37, that’s when things start falling off,” the Sportsman of the Year nominee and perennial national champion, points out. “Most squash players peak by the time they get to age 28, but I definitely have about three more years in me.”