PROUD TO BE JAMAICAN: Toni-Ann Singh receives the keys to the city of Kingston 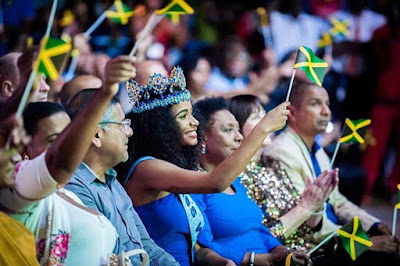 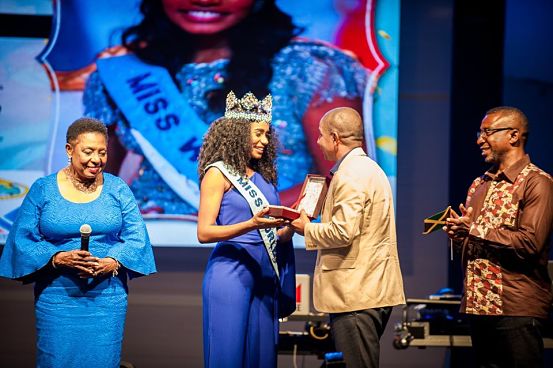 FEELS LIKE HOME: Singh accepting the keys to the city from Mayor Delroy Williams during Saturday's concert at Emancipation Park.

IT was a homecoming tribute fit for a queen: a raft of top-class entertainers sharing the stage inside New Kingston’s Emancipation Park on Saturday night to put on a celebratory welcome-home concert for Toni-Ann Singh, who recently became the fourth Jamaican to win the coveted Miss World crown.

Sitting up front next to Miss World committee team leader Julia Morley, her parents Jahrine Bailey and Bradshaw Singh, and culture minister Olivia ‘Babsy’ Grange, Singh beamed from ear to ear (occasionally tearing up) as emcee Debbie Bissoon introduced performances by the likes of Jermaine Edwards, Lila Ike and Richie Stevens, who all gave solid accounts of their reputable talents as they serenaded and entertained our Miss World before a large and attentive audience.

Also hitting the stage: Kevin Downswell (who did a neat medley of his gospel hits), the Ashe company (taking us on a rhythmic journey of indigenous Jamaican music through the decades), talented young storyteller/poet Ngozi Wright (who won vociferous applause for her piece “Toni-Ann Wins”) and songstress Kimiela ‘Candy’ Isaacs, who opened the show earlier, showcasing splendid vocals as she rendered “Girl on Fire” and the spiritual “Without You.”

The evening climaxed when Miss Singh was invited on stage (alongside her parents, Miss Morley, Minister Grange, Kingston’s mayor Delroy Williams and Miss Jamaica World pageant holders Weston Haughton and Dahlia Harris) to be officially presented with the keys to the city of Kingston.

She was overcome with emotion. “I’m so grateful for all the love,” she said during her response, giving thanks for the overwhelming support here at home and abroad. “I think you’ll get tired of me saying it, but ‘Thank you.’”

Singh’s four-day itinerary also included visits to her birth parish of St. Thomas and local women’s centres, dinner with the Prime Minister and courtesy calls on the Opposition Leader and the Governor General.