AT THE MOVIES: Just Mercy offers compelling testimony of one man’s brave fight for justice 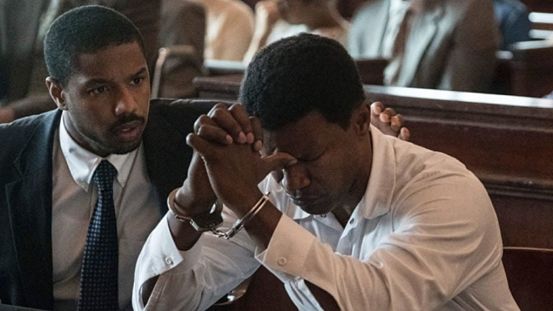 WORK TO BE DONE: Jordan and Foxx have a tough case on their hands.

IF there’s one thing Bryan Stevenson believes in it’s fighting injustice. His fascinating true story gets a compelling cinematic showcase in Just Mercy, in which Michael B. Jordan reveals yet another dimension to his acting chops, as a dramatic lead, portraying this ambitious and driven Harvard Law School grad, who is determined to get Johnny Dee McMillan (Jamie Foxx in an anguished performance) off death row and reunited with his family.

Set in late 1980s Alabama, the film (directed by Destin Daniel Cretton, from a screenplay based on Stevenson’s book) introduces viewers to a bright young lawyer and mama’s boy who decides to take on capital murder cases pro bono. It’s a move that perplexes and ruffles feathers. “Giving legal assistance is one thing, but putting convicted murderers back on the street is another,” he is sternly warned.

But Stevenson will not be deterred, convinced that McMillan, charged with the brutal murder of an eighteen-year-old woman, was convicted and put behind bars based largely on faulty testimony and the absence of hard evidence.

With the help of a loyal and trusty assistant (played by Brie Larson), he zooms in on the McMillan case, leaving no stone unturned (spending hours with McMillan at the prison, interviewing reluctant witnesses and distraught relatives and friends, and combing through police records) to put together his case – even amidst police harassment and death threats.

Depending on who you ask, Bryan Stevenson, who went on to win the case and reunite McMillan with his family, was either simply being fearless or stubborn as a mule. Truly, as Jordan’s performance attests, one doesn’t get the sense that he was trying to be a hero at the expense of these convicts. He just comes off as sincere, passionate and willing to go to war for a cause he strongly believes in. Tyrone’s Verdict: B+