LOVE TAKES A HOLIDAY: Dawkins turns up the heat with Once a Man, Twice a Wife 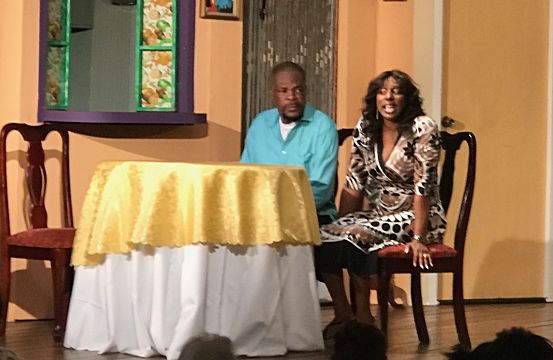 WE NEED TO TALK: Byron (Brown) and Abi (Harriott) discuss the state of their marriage.

IT’s about time the longsuffering husband broke his silence and shared his story of abuse – to kick-start the #HeToo movement. In Once a Man, Twice a Wife, you feel the pain and frustration of Byron Steele (Earle Brown), the play’s central male character.

Now in his second marriage, his wife Abigail (Karen Harriott in a brassy performance) treats him with such scorn, ridicule and callous disregard that he’s constantly punching the sofa cushion to let off the volcanic steam that’s been building up inside him. Is this well-deserved punishment being meted out to him? What did he do to her? We don’t get much backstory.

According to Abigail (a busy career woman), her husband is dark, his limitations have finally caught up with him and he’s taking it out on her. According to Byron (a sewage plant worker), he’s an innocent man. He pleads with her but to no avail.

Their housekeeper Miss Enid (an excellent Dorothy Cunningham) does her best to ameliorate the circumstances and defuse the tension in the household, but the last thing Abi wants is to reconcile with Byron. She wants out.

Written by ace playwright Basil Dawkins, the production presents Mr. Steele (convincingly played by Brown) as a good man – honest, hardworking with a modest occupation – who is getting a raw deal in his own house. Abigail, meanwhile, comes off as a bitter and unreasonable spouse who is running the risk of losing her husband to another woman – a nurturer like Miss Enid.

Once a Man, Twice a Wife, full of dramatic tension, gripping dialogue and observations about matrimony, class and status, marks the reunion of Dawkins and longtime directing partner Douglas Prout. While the play is by no means their most sterling effort together (I’d reserve that honour for works like For Better or Worse and Divorce Papers), it’s certainly a solid entry in their collaborative canon.

They have a knack for elevating everyday stories (rocky marriages, broken people) into parables about humanity and fighting for your survival. Tyrone’s Verdict: B+