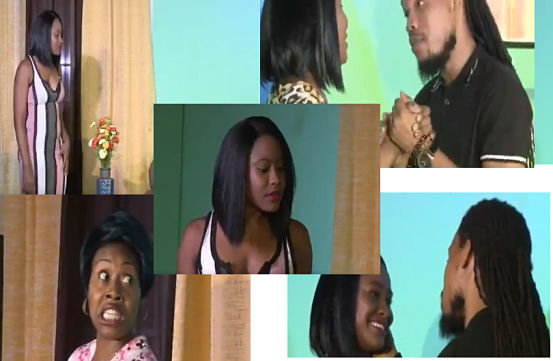 LOVERS & FRIENDS: Hazle, Williams and Wilson in scenes from the play.

COUNTLESS women have been in Janet Smith’s size-seven stilettoes. She thinks she’s found real love at long last, only to discover, weeks later, that the dreamboat who has swept her off her feet is a wolf in sheep’s clothing, a player. Such betrayal can be gut-wrenching. For Janet, it cuts deep. But she had been warned.

In writer-director-producer Dahlia Harris’ latest offering Hell & Powder House, a frank and frequently funny dramedy, single-and-ready-to-mingle Janet (played by Stephanie Hazle) comes off as a hopeless romantic desperate to make a meaningful connection with Antonio (Kadeem Wilson), the fellow she’s having her first face-to-face date with – at her house!

Alarmed by Janet’s lack of caution and certain that she knows this Antonio by another name, her best friend and hospital co-worker Sasha (Renae Williams) warns her that this charmer is not who he appears to be. Janet, however, dismisses Sasha’s concern as the mutterings of a jealous friend who isn’t getting any. “Plans for my life don’t include growing old and lonely,” she is quick to emphasize.

But, as they say, what’s concealed in the dark always comes to light, and Janet is in for a rude awakening that flips her world so fast it makes her head spin.

Updating the script of her powerful 2010 hit Judgement, Harris draws on ample humour and dark realism to spin a provocative, utterly believable tale centred on romantic delusions, trust, vengeance and the true meaning of friendship. You get to see what can happen when loyal friends join forces in a time of crisis.

Hazle and Williams are superb in their roles, ideally cast opposite Wilson, who brings some of that same rude-bwoy swagger and edginess that made him such a standout in Sprinter. But it’s Hazle’s nuanced and committed portrayal in the lead that is the show’s biggest revelation.

As Janet Smith vividly demonstrates, in this post-Me Too era, the damsel-in-distress is turning the tables and taking zero prisoners. Tyrone’s Verdict: B+