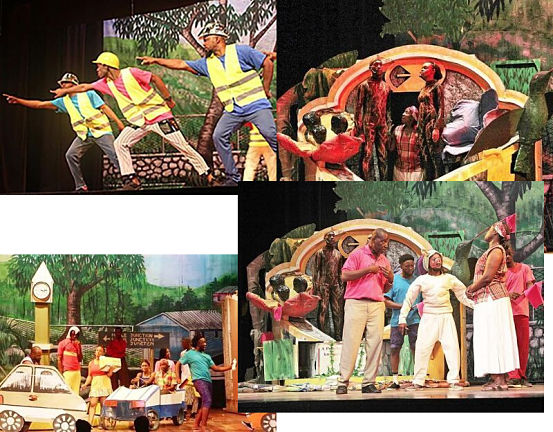 POLITICIANS are well aware that in Jamaica, especially in certain quarters, you will get the people’s support – but it will cost you. “Weh yuh ah do fi we?” is a common refrain. And failure to make good on your promises will cause serious “ruckshon.”

For their 2019/2020 offering, the LTM pantomime company has cooked up a hugely enjoyable, visually appealing delight that looks at hard-knock politics, people power, roots and history, and what can happen when those seeking higher office choose to play hard ball with voters.

With elections coming up, Mr. Biggz (Carlton Butler) wants the people of Top Junction to re-elect him. He’s a man who puts his money where his mouth is. And with his trusty sidekick Lucky Pig (Derrick Clarke) in tow, he goes about offering “freenis” galore.

Naturally, the struggling residents happily accept. But not all constituents count themselves among his fanbase, most notably community matriarch Miss Vie (Maxann Stewart-Legg) and her daughter, Kenya (Jasmine Lue), who are adamant that he should not be allowed to abuse his power and do as he pleases.

When a planned community-park development project gets underway, for which Biggz recruits the mysterious Crocodylus (Ray Jarrett), that’s when sparks fly and their differences become painfully clear. It leads to a showdown so explosive that Top Junction and its traditional way of life may never be the same again.

As Ruckshon Junction attests, the way of doing things at the LTM is gradually making way for a fresher take by a new, high-energy generation (led by the Pantomime Workshop), taking this nearly 80-year-old institution into the Instagram era.

From last year’s All Aboard to this season’s offering, the efforts are yielding succulent fruit. After all, a right balance of the traditional and the modern never fails to provide an entertaining package. Tyrone’s Verdict: B+