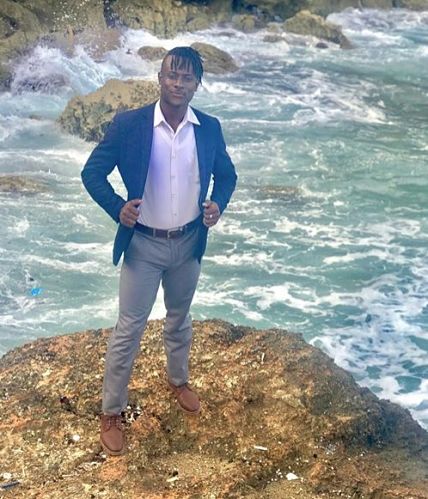 ROCK SOLID: “I’m always trying to grow as a performer because that’s supposed to be the aim,” says Grizzle.

WHILE a student at Pembroke Hall Primary, Faybian Grizzle displayed immense athletic prowess, dominating his peers on the track. But at Kingston College, years later, he decided to pursue an artistic path, alongside his academic studies, joining the famed KC Chapel Choir, touring and performing with his fellow choristers all the way up to sixth form.

That experience planted a seed that has since bloomed into a full-blown passion for the performing arts. Shortly after graduating from KC, Grizzle was wise to join the Ashé Company, coming under the sway of veterans Conroy Wilson and Michael Holgate.

He’s now been a part of the Ashé family for eight years, getting to indulge in the expansive range of expression that the arts have to offer. “Dancing is my passion because of the joy and the fun that it brings. I’m always trying to grow as a performer because that’s supposed to be the aim. You don’t want to become complacent,” he tells TALLAWAH as we sit out front at their Cargill Avenue headquarters one recent evening.

Already, Grizzle is impressing important people in modern/contemporary dance. Thanks to Marisa Benain’s Plié for the Arts initiative, he snagged an internship/workshop with the well-regarded Complexions Company in New York last summer. It was a dually fulfilling and eye-opening experience for him. “That’s a very challenging and competitive environment to be in. You’re among people who’ve been dancing since they were two. But it was also a great learning experience for me because dancing professionally in the US and elsewhere on the international scene is a dream of mine,” he says. “I want to be travelling and dancing and choreographing for a living.”

Grizzle, who hails from Maverley, certainly looks the part. With his taut, slightly built physique and the regal poise and bearing he brings to his performances, he’s been transforming himself into a model student of his favourite art form. It will never be just a hobby for him. “I want to see passionate Jamaicans being able to do the performing arts and be able to sustain themselves from it. A lot of us can’t do that. We have to do a 9-to-5 and then pursue the art on the side,” shares the 24-year-old, who completed his degree in marketing at the Mona Campus.

Naturally, there’s a lot he’s looking forward to accomplishing. “I’m keeping my options open,” he says. “Working with a company like Alvin Ailey would be a dream come true, but no matter what happens I want to be dancing and performing for a living.”

And speaking of the big jobs, when The Lion King came to Jamaica to hold auditions in Kingston last year, Grizzle and several of his peers tried out. He got shortlisted, which he took as a very good sign. Says Grizzle, “I’m not giving up on that dream.”