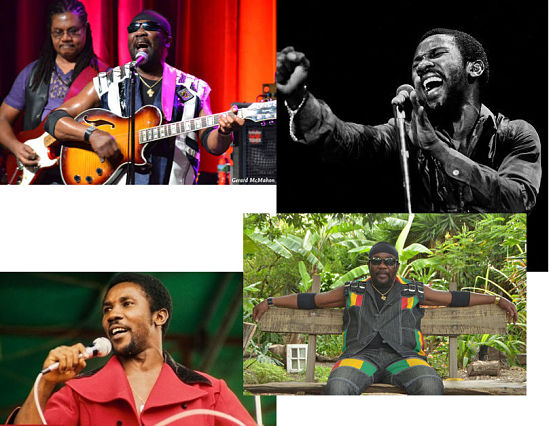 “When I first heard ‘Pressure Drop’ that was a big moment. He had such a powerful voice, and on stage he always gave the audience his total energy. A sad loss to the music world.” – Rock icon Mick Jagger (The Rolling Stones) paying tribute to the late great Toots Hibbert
**
“I will now have to more play the role of coach rather than player to make sure any strategic gaps, any tactical shortcomings are immediately corrected, and that when we take the long view we are actually looking in the right direction.” – Andrew Holness being sworn in as Prime Minister for the third time in Jamaican history
**
“We’re extremely disappointed with the outcome of the Elections. I must say personally that I didn’t see the level of defeat coming. I was hopeful of a victory. I am somewhat hurt by the outcome but also hopeful of the rebuilding that will take place in the People’s National Party.” – PNP Vice-President Damion Crawford responding to the party’s epic defeat in the 2020 General Elections
**
“We think the risk factor is far, far greater than if we were to continue online. [We’re watching] what is happening with the rising cases with the pandemic.” – New JTA president Jasford Gabriel on why he objects to schools reopening as scheduled on October 5
**
“I think the country recognizes that agriculture and fisheries has one of the most critical roles to play in the building back of the Jamaican economy… We want to bring Jamaica back to where it was, when we were leaders in agricultural research and development in the Caribbean. That will be one of the priority areas of focus.” – New Agriculture minister Floyd Green sharing some of his plans

Posted by TALLAWAH Magazine (tallawahmagazine@gmail.com) at 3:53 pm No comments:

MAN IN THE MIRROR: Award-winning gospel star Jermaine Edwards on patience and perseverance and impacting lives 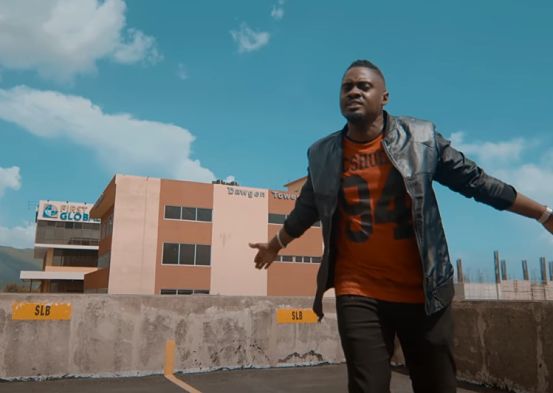 MIND OVER MATTER: “For me, it’s now about impacting lives,” Edwards says.

IF there’s one supreme lesson life has taught Jermaine Edwards it’s the value of being patient. “Patience is about having the discipline to take things in stages and in order. There’s no really successful person out there who didn’t take the time to come up with a proper plan. If you had the discipline you wouldn’t be impatient,” the ace gospel singer-songwriter shared during a guest spot on CVM’s The Alrick Show.

By all appearances, Edwards’ impressive rise in the gospel music game was the result of patience and some proper planning. But, as he explains, a recording career was never at the forefront of his mind back in the day. “I’ve done several business ventures. I’ve had a car wash. I tried to open a gym. I even went into the classroom for two years,” says the entertainer and son of a preacher man who started out directing the choir and playing keyboard at his daddy’s Spanish Town-based church.

Dear old dad, who saw the potential and the promise, decided to invest $300,000 of his own money to give his talented son a push-start. And the rest, as they say, is history.

A married father of two daughters (an 18-year-old and a 14-year-old), Edwards has been making incredible strides ever since – from starting his Island Worship label and releasing notable hit songs (“Peace in my Soul”, “Beautiful Day”, “Hallelujah to Our King”) to dropping albums like last summer’s I Will Follow, which helped him cop four wins (from a leading eight nominations) at this year’s staging of the Sterling Gospel Music Awards – including Male Artiste of the Year.

“For me, it’s now about impacting lives,” Edwards says. “My purpose is to use this instrument God has given me to reach youths, men in particular, and show them a different perspective on life. What’s important is that, as an artiste, you do something for somebody’s life; help make him a better father, a better husband; help him reach a better place.”

>> Check out Jermaine’s new video “Watch Over Me”

Posted by TALLAWAH Magazine (tallawahmagazine@gmail.com) at 4:15 pm No comments: 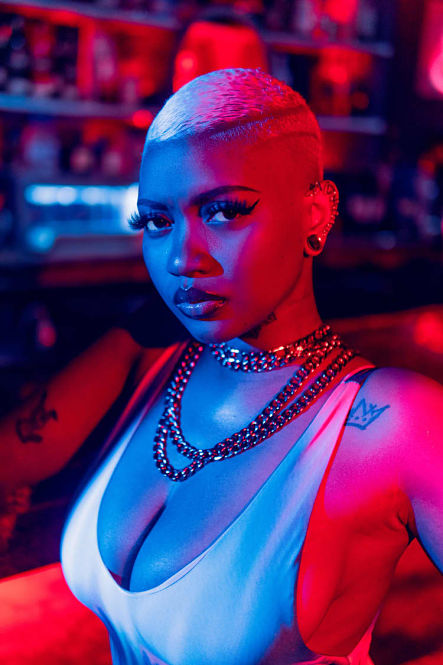 Jada Kingdom – “Win”
The soulful songstress empowers listeners with this introspective and beautifully penned track, reminding us that at the end of the day nothing trumps perseverance and passion. It is a clear winner. A
**

Tarrus Riley & Shenseea feat. Rvssian – “Lighter”
Teaming up for the first time, this dynamic duo brings the curtains down on summer 2020 with one of the hottest collaborations we’ve heard all year – an infectious, radio-ready love song set to a groovy reggae beat supplied by the uberproducer. A-
**

TALLAWAH One-To- Watch Artiste
Maestro Don – Pioneer (feat. Bounty Killer)
The rising dancehall artiste shows that he’s been busy honing his skills, competently holding his own, with grit and slick rhymes, alongside the living legend, who is well-known for helping up-and-comers achieve their breakthrough in the business. B+
**

Natel – “Telephone Love”
Over the years, quite a few recording artistes have taken a musical stab at the J.C. Lodge classic. With his signature smooth-player strokes, Natel delivers a respectable interpretation, imbuing the track with a melodic tenderness sure to warm up the hotline. B
**

Rygin King – “No Emotion”
The Rygin King story almost came to an end a few months ago, after a gun attack left him battling for life. But the dancehall soldier proves he’s made of tougher stuff. He bounces back admirably with this no-nonsense single about resilience, a refusal to crack under pressure. B+

Posted by TALLAWAH Magazine (tallawahmagazine@gmail.com) at 3:35 pm No comments: 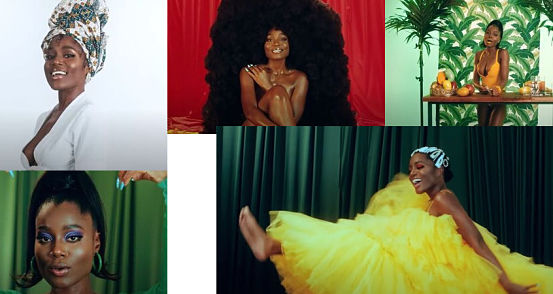 BEAUTIFUL SOUL: The songbird plays with vibrant textures and tones in her new video.

Admirers and near everybody else are in awe of the fascinating trajectory that’s defining the career of reggae-soul songstress Sevana. Indeed, she’s growing from strength to strength as a creative artiste and evolving into an increasingly gorgeous and mature young woman. We’ve watched her make the leap from indie songbird (“Sometime Love”, “Nobody Man”) signed to Protoje’s Indigg.Nation label to an RCA Records newbie ready to take the world by storm. She certainly has the look and the talent for it. Witness her latest music videos (for “Mango” and “If You Only Knew”), two visually stunning productions that show off her luminous beauty, which recalls the profile of a young African queen. “Mango”, in particular, which is richly colourful and playful, is testament to how clever and artistic she is. We’re so intrigued to see what she’ll deliver next. [Watch the “Mango” video HERE.] 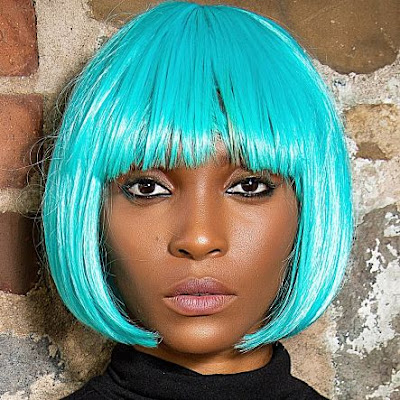 The Chameleon: Turning heads with her dazzling outfits and flawless face while winning scores of new fans, singer-actress Sakina Deer worked the scene and commanded attention as she vied for top honours in this year’s Jamaica Festival Song Competition, finishing as the best-placed female contestant overall. What’s next for the superbusy showbiz veteran? “I’m going to continue to try and get my lash and makeup business up and running,” she tells The Gleaner’s Avenue E, “and act whenever the opportunity presents itself again, and accept any gift God gives… I have my vision board with plans for my life that have not changed.” BTW, we think Sakina did an awesome job with her Festival entry “We Are Jamaica.” More music please! 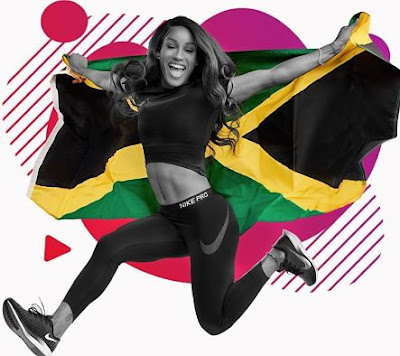 Fly Girl: These days it’s good to be Briana Williams, who is immensely enjoying life in the fast lane. The teenage sprinting phenom has not only signed on as the newest ambassador for corporate giants GraceKennedy; she’s the latest addition to Digicel Jamaica’s ever-growing stable of top-flight talents, joining the likes of Usain Bolt, Rodney ‘Bounty Killer’ Price and Shelly-Ann Fraser-Pryce (who also works with both Grace and Digicel). With the Tokyo Olympics and other big events looming large on the horizon, all eyes will be on Briana.

Posted by TALLAWAH Magazine (tallawahmagazine@gmail.com) at 3:56 pm No comments: 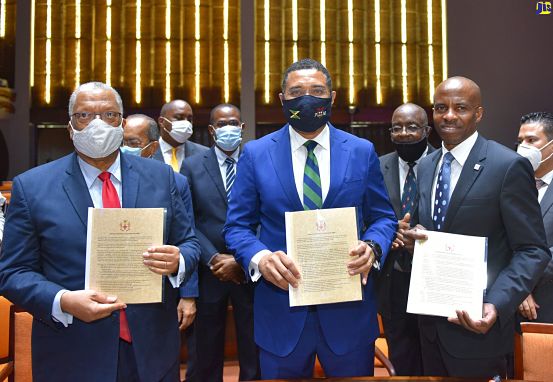 IT’S long been acknowledged that it will take a serious collective effort to effectively tackle the enormous problem of crime and violence in Jamaica. To that end, a process has been activated by PM Andrew Holness and Leader of the Opposition Dr. Peter Phillips, aimed at forging and unprecedented bi-partisan approach to this islandwide challenge. A working group was established to undertake research and consultations.

Over the course of the past ten months, their efforts have borne fruit, leading to the development of a document called ‘The National Consensus on Crime – An Imperative for Jamaica.’

“We now have substantial agreement on the principles, pacts and initiatives that we collectively believe will provide a platform for tackling and enabling a sustainable reduction of crime, corruption and violence in Jamaica,” the working group is now reporting. “Our politicians have come together, civil society stakeholders have come together and we now look forward to the nation coming together, as we provide the opportunity for the entire nation work together.”

Among the organizations that make up the working group are the Jamaica Chamber of Commerce, the Jamaica Council of Churches, National Integrity Action, the Jamaica Manufacturers Association, the Mona Guild of Students and the Private Sector Organization of Jamaica (PSOJ).

>> Editor’s Note: Government officials and civil society leaders came together to make the consensus official at a crime summit, hosted by the Jamaica Conference Centre, on August 3.

Posted by TALLAWAH Magazine (tallawahmagazine@gmail.com) at 1:49 pm No comments: