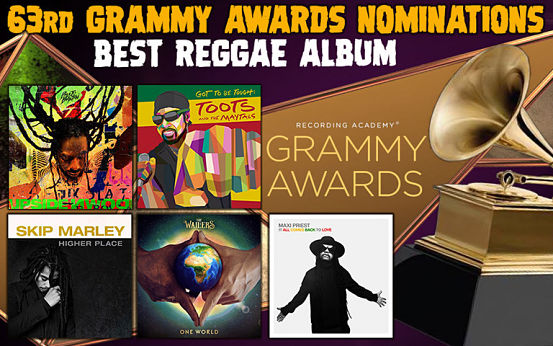 BEST OF THE BEST: The 5 albums vying for music's highest honour.
IN 2005, Damian ‘Junior Gong’ Marley scored two Grammy nods: Best Reggae Album for Welcome to Jamrock and Best Urban/Alternative Performance for the single of the same name – a rare accomplishment for Jamaican and Caribbean artistes. Marley went on to win in both categories.
Fast forward almost two decades later and his nephew Skip is nominated in two categories: Best Reggae Album for Higher Place and Best Reggae Song for his chart-topping collaboration “Slow Down” with H.E.R.
But to take home the coveted awards, Skip Marley has some stiff competition, especially in the reggae field. Buju Banton could secure his second career Grammy win for his critically acclaimed comeback disc Upside Down 2020; The Wailers are nominated for One World; Maxi Priest is in the running with It All Comes Back to Love, while the late Toots Hibbert (and the Maytals) made the cut with Got to Be Tough.
The winner will revealed come Sunday, Jan. 31.
Meantime, R&B-pop superstar Beyoncé leads this year’s pack of nominees with nine bids, including four mentions for her hit protest anthem “Black Parade.” Dua Lipa, Roddy Rich and Taylor Swift each picked up six nominations.
Talk show host Trevor Noah will host the 63rd Annual Grammy Awards ceremony will be broadcast on CBS, live from the Staples Centre in Los Angeles.