AT THE THEATRE: Pantomime Company looking to connect with audiences new and old with their first virtual revue 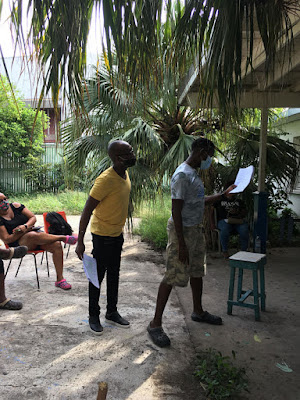 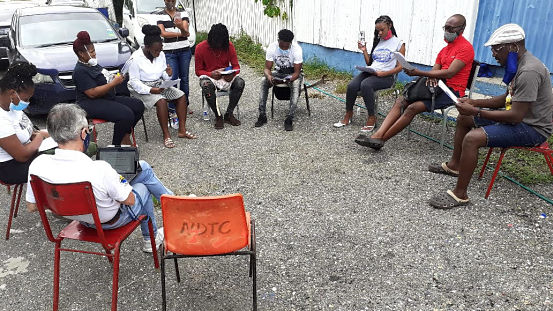 FULL CIRCLE: Cast members in rehearsal for this season's production.
WHENEVER the Pantomime Company assembles to commence work on a new production, the excitement is through the roof. The cast and crew gets a real thrill out of the annual meet-ups for creative collaboration. So one can imagine the immense thrill, joy and relief, given the dreaded COVID restrictions, when members were informed that for the 2020 production they would be coming together to do a revue, which will be taped for virtual presentation.
“The guys are happy to be back because there was a lot of doubt, a lot of back and forth, as to what would happen this year. So when they heard that we’d still be doing something, everyone was glad. [Coming together] is something we look forward to every year,” says LTM team coordinator Anya Gloudon, following a recent rehearsal.
The 2020 production is titled Nah Give Up, and it’s a nearly 90-minute revue that will feature excerpts from previous hit shows (The Upsies and the Downzies, Iffa Nuh So, Queenie’s Daughter, among them), with lively song and movement accompanied by tracks and their in-house band.
“We’re basically using pieces and certain characters from previous pantomimes that we’ve done to relate to what’s happening now,” Gloudon explains. “We’re leaning a lot on technology, like Zoom, so we’ll premiere it on our Facebook and other social media pages.”
Helmed by renowned stage director Pierre LeMaire, the 78th annual production will feature a cast comprised of Pantomime regulars, led by such veterans as Kevin Halstead and Ray Jarrett.
Nah Give Up is set to debut on Boxing Day (Dec. 26) at 6pm.