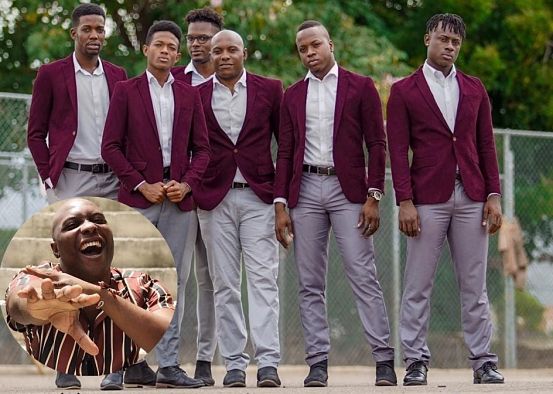 THE BOYS IN THE BAND: “I try to give them a sense of hope,” says Tomlinson, pictured here with members of the ensemble's male chorus.
IN person, Rudy Tomlinson comes across as a jovial and passionate youngster who has his serious moments. Professional, disciplined and not difficult to get along with. That’s why he strikes you as the ideal type to serve as leader of a multifaceted troupe like the Ashé ensemble (of which he’s been a member since 2009), whose core members – a wildly creative and energetic bunch – hail from a wide array of upbringings and social experiences.
But at the same time, this kind of diversity of personalities can bring challenges, which Tomlinson knows all too well. “It can get rocky at times because you have various different personality types and characters to deal with, and sometimes what they are dealing with in the home space can be hard to deal with,” he tells TALLAWAH.
Still, the 31-year-old Edna Manley College and Papine High alum has developed surefire strategies for quelling any tensions that may arise while he strives to keep everyone on the same page and moving forward.
“For me, leadership is a great responsibility. People are watching you and following in your footsteps and you have to ensure that you lead with some level of integrity. You have to help the members improve and grow and keep moving forward,” he shares. “I try to give them a sense of hope.”
Such huge responsibilities have not only brought life-altering lessons but have contributed immensely to his ongoing evolution as a young Jamaican man heading into his 30s. On reflection, Tomlinson tells TALLAWAH, “Apart from the patience and the discipline, you learn to believe in your craft and your dreams and what you set out to accomplish.”
>> Profile: 3 Fun Facts about Rudy Tomlinson
1. He has musical-theatre roots, having performed with the JMTC and the Jamaican Folk Singers. He’s also appeared in such hit Father HoLung and Friends productions as Moses, Amazing Grace, Jesus 2000 and Isaiah, which enjoyed a successful remount in Trinidad.
2. He dropped out of his Edna Manley College dance programme in 2014, but he has since resumed tertiary studies (in Social Work) at the University of the West Indies, Mona Campus.
3. Following up his high-school exploits in the JCDC Festival of the Performing Arts, Tomlinson secured a Top-10 finalist spot in the 2012 National Festival Song Competition with the crowd-pleasing entry “Down in Jamaica.”