2020 IN REVIEW: Jamaica’s 10 Most Fascinating People of the Year 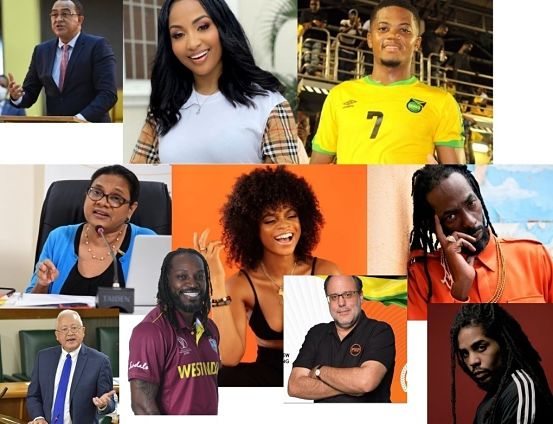 In a year that will forever be remembered for many things (the advent of the coronavirus, the death of Butch Stewart), these ten Jamaicans staunchly epitomized the idea of the intriguing newsmaker.
Skip Marley
The Billboard coup and double Grammy nod (in the reggae and R&B categories) not only solidified Skip Marley’s triumphant year; it confirmed his status as one of the most important ascending artistes of this generation, following in the footsteps of Junior Gong, Stephen Marley and Ziggy Marley with music that’s both tuneful and timeless.
Dr. Jacqueline Bisasor-McKenzie
To call her a “woman of substance” or a “powerhouse” in her field would be a mammoth understatement, as the Chief Medical Officer’s extraordinary efforts to meet and overcome the challenges of her job, especially given the alarming COVID-19 stats, continuously highlights her capacity for leadership we can trust in a time of crisis.
Lila Iké
By the time Lila Iké dropped her hit-laden EP The Experience, she had already cemented her place as reggae’s new it girl. Since then, she has not disappointed, releasing sublime singles (and accompanying videos) that showcase her astonishing artistry and fearlessness as a young, very competent singer-songwriter with something meaningful to say.
Dr. Christopher Tufton
Without a doubt, Chris Tufton concurs with PM Andrew Holness that 2020 was the toughest year of his political career. The health ministry’s handling of the COVID crisis has certainly tested the mettle of the veteran government minister who has had countless sleepless nights since March. Then there was the Market Me controversy that brought even more drama, ahead of the intense General Elections in September. In the end, Tufton proved he’s tough enough.
Shenseea
Even in the face of tragedy (she lost her mother), Shenseea put in work that outperformed most of her male peers by a furlong, making her a shoo-in for Entertainer of the Year, an honour well-supported by the endorsement deals (Boom Energy Drink, Rihanna’s Savage X Fenty line), the solo business ventures and the hit singles that dominated the airwaves, music video playlists and the charts.
Mark Golding
New party president Mark Golding ended the year with a bold promise that he’ll be constantly reminded of: the People’s National Party will be back in full force within three years. The man who fended off a stern challenge from Lisa Hanna to replace Dr. Peter Phillips as PNP leader has his cut out for him, but with the competent Opposition team he’s assembled, we’re anticipating a display of first-rate sportsmanship that does justice to the party’s storied history and legacy.
Delroy Chuck
If there’s one thing Delroy Chuck learned this year it’s that one should never take a light approach to serious issues like sexual harassment. Though he quickly apologized for his blooper, the Justice Minister’s insensitive utterance cut deep for many, especially women in power, who took him to task. When the dust settled, Chuck managed to hold on to his seat in the House, following the September General Elections, ample proof that we the people still believe in him.
Leon Bailey
As his goal-scoring exploits for Bayern L continued to garner attention and win him new fans, Leon Bailey entered a new chapter in his life, becoming a father for the first time, at age 24. The JFF controversy aside, the Reggae Boy maintains close ties on the island, even popping in to attend Usain Bolt’s 34th birthday party in August. And like a loyal son, he leaped to Craig Butler’s defence in early December, publicly voicing support for his manager-adopted father in the face of domestic abuse allegations.
Chris Gayle
Will Chris Gayle ever make a return to the Jamaica Tallawahs squad? By all accounts, that’s water under the bridge for the superstar batsman whose row with the CPL team’s top brass over his shocking omission from the 2020 lineup made headlines, which only gained more public attention when a series of videos uploaded to his YouTube page, in response to the development, landed him in hot water.
Buju Banton
Releasing the kind of captivating and stirring reggae music that made him a household name back in the day, Buju Banton recaptured his fanbase in a year that climaxed with him picking up another Grammy nomination for Best Reggae Album and snagging Best Reggae Act at the MOBO Awards, for Upside Down 2020 – a blend of roots-rockin’ reggae and hard-hitting social commentary. As if the music wasn’t enough, Banton found time to branch off into fashion retail with shop.bujubanton.com, offering his fans a mix of street staples and cool urbanwear.